I have been doing a little research relating to the following question raised in Watch No. 7629 - a slight diversion - first instalment.

I have found an announcement in The Glasgow Herald - May 14 1852 offering to Watchmakers, Silversmiths and Others the Lease of the Shop at 32 Nethergate, Dundee, lately occupied by the deceased Mr William Henderson, together with Stock, Shop Fittings and the Goodwill of the Business.

I also found an announcement in The Edinburg Gazette - May 28 1895 relating to the Estate of James Rattray, Watchmaker and Jeweller, 32 Nethergate, Dundee, deceased.

Rattray & Co (Jewellers) Ltd 1862-1968 stock books, notebook, scrapbook are in a collection held privately but listed in the National Register of Archives. I have made an enquiry about whether these records include any papers taken over from William Henderson. Because of the date range I doubt it but I expect to get a response from the NRA in about 3 weeks.

I have also been studying Dundee Directories and Dundee Post Office Directories which are downloadable from the Internet Archive or the National Library of Scotland, having been digitised by Dundee Public Library. My research is detailed here and a brief summary follows:
Also of some interest:

Drawings by the Dundee lithographer Charles S. Lawson (d. 1884) of Nethergate as it was before the Improvement Act of 1871.

3 drawings of St Mary's Close (which is at 30 Nethergate), listed as William Henderson's home in the 1850 Dundee Directory:

and part of an 1857-58 Ordnance Survey map showing 32 Nethergate and St Mary's Close: 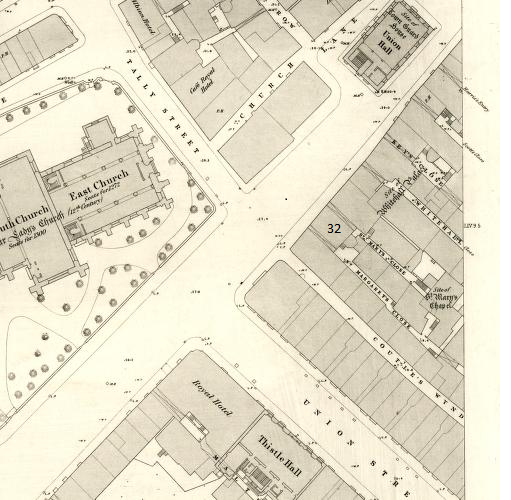 I have searched for as burial record for William Henderson, watchmaker, so far without success.

This glimpse into commercial history has been quite fascinating. The Directories will, I am sure, occupy many more interesting hours; the Advertisements, alone, are a joy to read.
Posted by Simon at 18:17